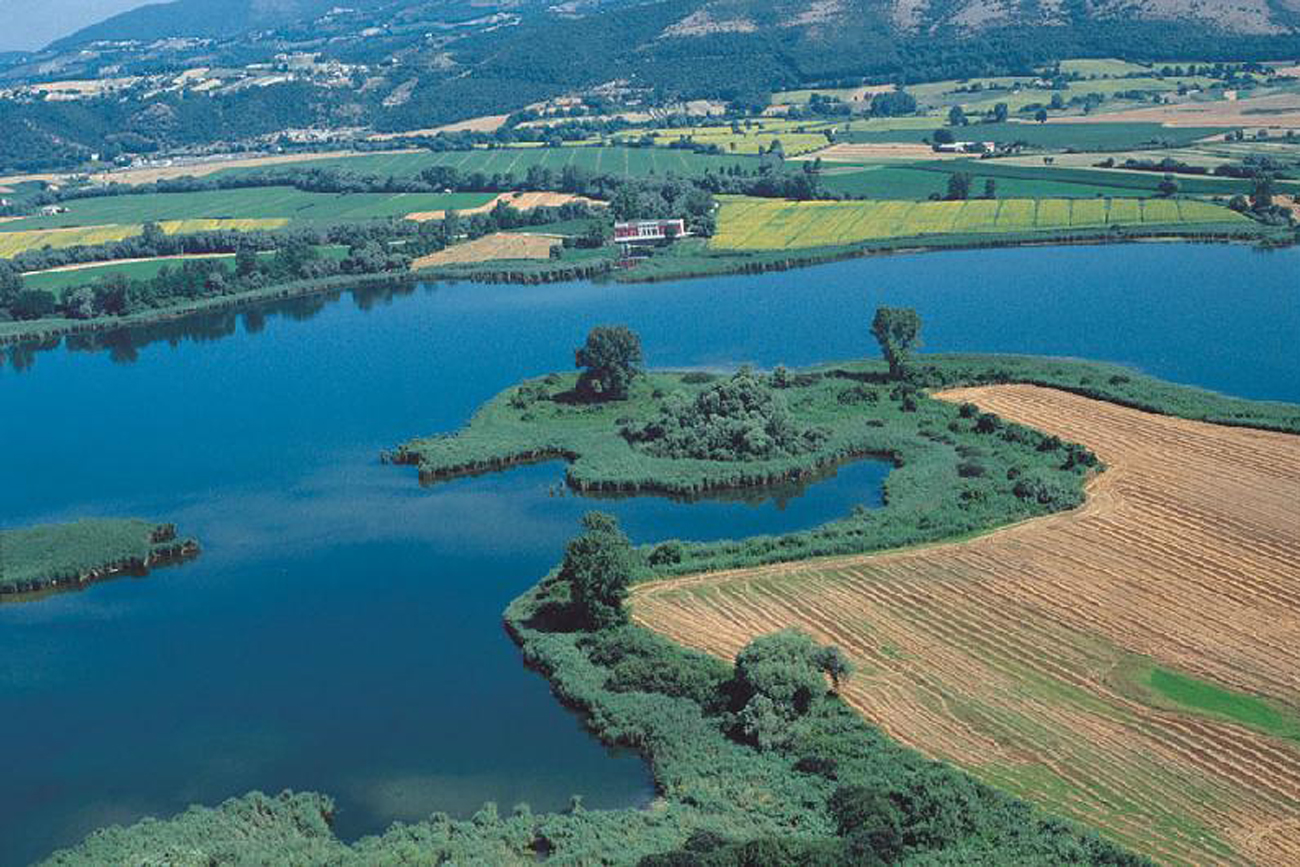 The vicissitudes of the territory included in the Partial Natural Reserve of lakes and along Ripasottile relate to very remote epoch.
During the Pleistocene, the first of the two geological periods of the Quaternary or Neozoic characterized by the appearance of man and the great development of the ice at some stage of the period, the Rieti plain was actually one big lake, emerged some reliefs, small islets of that distant time.

And ‘it is known (by in-depth studies on their specific subject) that the river Velino, with a travertine barrier originated from their particularly rich waters of limestone, played a key role in the origin of the ancient lake.
The deposit share, at the confluence of the Black River, (performed by the Velino in the resort not surprisingly called Marmore), as well as the continuous and massive erosive activity of the Black, led to the differentiation of the level corresponding to more or less the present situation in the vicinity of Marmore.
So for a certain period, the travertine dam formed a kind of dam and allowed the natural expansion of the large lake in the Rieti valley. Thus was born the Lacus Velinus often cited by ancient classics.

At this stage, you can define the maximum expansion, followed later, characterized by the opening of a natural gap through which defluivano part of the waters of Lacus Velinus, which thus lowered, with the formation of land and swampy.
In this period, therefore it characterized by a Lake Velino historic, as it was defined, the perilacustri settlements due at the end of the Bronze Age and the early Iron Age, which have been found, especially in the area next to Piediluco, archaeological finds.

Until III a.c. century, the lake Velino did not undergo changes; according to historians should in Manlius Curio Dentato cleaning up the Rieti Conca by excavations in the locality Falls, as reported by Cicero (At Epis. Att. IV, 15), while other classic authors, such as Pliny, do not cite Manlius Curio toothed, but still they remember the opening of the quarry in Marmore and the outflow of the lake water into the Nera. In practice so it was that the ancient Lacus Velinus retired, many emerged lands and waters were reduced to ponds which would correspond to the lake Piediluco, Ventina, Ripasottile, Long, Fogliano and other minor related to current blades.

To this reduction in area lakes corresponded a significant boost to human activities, so the same Caesar in 59 B.C. .. promulgated special agrarian model rules. Varro, in his work “De re rustico`, treated aspects agronomic and livestock environment particularly the Rieti plain, as Cicero himself expressed positive assessments of the Rieti rural land, comparing them to those most fertile of all. Even the fishing was in those very important times. in this sense, it expresses Columella.
Then the history of places regards to some extent the same Abbey of Farfa, who became owner of one part and the lake.

The situation concerning the status of the waters not remained constant over the centuries; thus silting phenomenon underwent an increase, around the tenth and fourteenth centuries, that were modified greatly pejorative sense, especially because of malaria, environmental and housing characteristics of the territory.
It is certain that the landscape of the plain over the centuries has undergone profound changes as a function of their subsequent surges or drops in water level, And ‘interesting to remember, among other events of a certain historical interest, the settlement, in the context of the territory in question, the Cistercian monks of San Pastore in the twelfth century. It ‘true that the same monks in 1234 I asked permission to rebuild elsewhere, in a healthier place, the Monastery. It must arrive at the middle of the thirteenth century because it reaffirms the need to ribonificare again the district.

A major role in cleaning up the canal, commissioned by Manius Curius Dentatus, was carried from the Abbey of Farfa, the owner at that time much of that territorio.Il Lake Velino characterized thus so much the Rieti plain that the links between the various locations

Lake Velino characterized thus so much the Rieti plain that the connections between the various locations often took place by boat, as the testimonies of the time stress. The same St. Francis, according to the traditions and as far as we the biographer Thomas of Celano, used for their journeys the boat and even saved people from the great lake. The situation concerning the water level did not change substantially until the fifteenth century. Under the Lordship of Fortinbras arm, to drain the water, he dug a new channel, called before Reatino and then Gregorian, whose construction was completed in 1422.

In fact, given the modest results achieved, the situation did not change much, so the interventions will also succeeded with the commitment of eminent personalities such as the architect Antonio da Sangallo, who bored the so-called “Poolino` Cova. A Pope Clement VIII in 1596 it should be the beginning of those jobs that, thanks to the “Cava Clementina” (actually a return to the excavation of the first curlano channel), had to carry the water to more or less the present situation. Inevitably, over the centuries the history of this lake became political, economic and social history of his difficult relationship with the man: the Sabines, the Romans, the Cistercian S.Pastore, the popes, a whole host of famous architects were engaged for centuries in the problem of agro Rieti: fishponds or fertile plain?

Many centuries of land reclamation projects and led to only a partial and temporary solution. You have to wait the 30s, when the construction of the S.Susanna channel that conveys the many waters of the homonymous source directly into the river Velino, and connects the two lakes with an artificial channel (Vergara), and with the creation of a scooping lifting facility in lake Ripasottile that transfers water excess in the adjacent river Velino, to see solved the problem of regimazione the water level in the lowest part of the Rieti valley. ln recent times, with the project of Rimini, it was definitively settled the flow of the river Velino storing the waters of its main tributaries Salto and Turano in mountain reservoirs, formed by the construction of dams.

The improved health of the particular ambient conditions led since the end of ‘700 to a significant boost anthropization of the territory, which now, with the establishment of the reserve, is the ability to be protected from future tampering that could disrupt an extraordinary environment from a naturalistic point of view, but also particularly hard hit by man throughout history. Fog stagnating in the plain of Rieti view from Terminillo. The image gives an idea of how should occur during I’olocene Lake Velino small hills (Monte Isola, San Balduino, San Pastore) protruding from the mist represent the ancient lake islands.
THE ESTABLISHMENT OF RESERVES
The establishment of the Partial Natural Reserve of Lakes Lungo and Ripasottile is a fact of extraordinary importance which dates back to 1985, when it was enacted in June a special regional law, the No. 94, which also entrusted the management of this reserve to a Consortium of Municipalities Cantalice, Colli sul Velino, Contigliano, Poggio Bustone, Rivodutri, Rieti, the Mountain Community Montepiano Rieti, 5th zone.

As it always happens in these circumstances, the path taken to arrive at the final result is positive, however, been difficult, full of obstacles. Indeed the natural and scientific value of the territory now included in the reserve has been underlined on several occasions: in 1971 by the Italian Botanical Society – Nature Conservation Group – who inserted the lakes in the “Census of biotopes of interest worthy of vegetation conservation in Italy”; in 1973 from C.N.R. which includes the area of the lakes in the “Cartography of areas of particular natural value of the Lazio”, as a result of numerous geological and zoological and botanical studies conducted by the University of Rome, L’Aquila, Camerino; and finally, by the students of the University of Essen (Germany), which in 1985 under the guidance of Professor Peter Kramer (responsible for WWF International conservation – IUCN,) made an interdisciplinary study on the whole territory of the Reserve and Lake Twenty highlighting not only the features already described but noting animal and plant species of great interest ever reported before. indeed for a long time the danger of the lakes used differently from the Reserve philosophy has been looming since the ’70s.