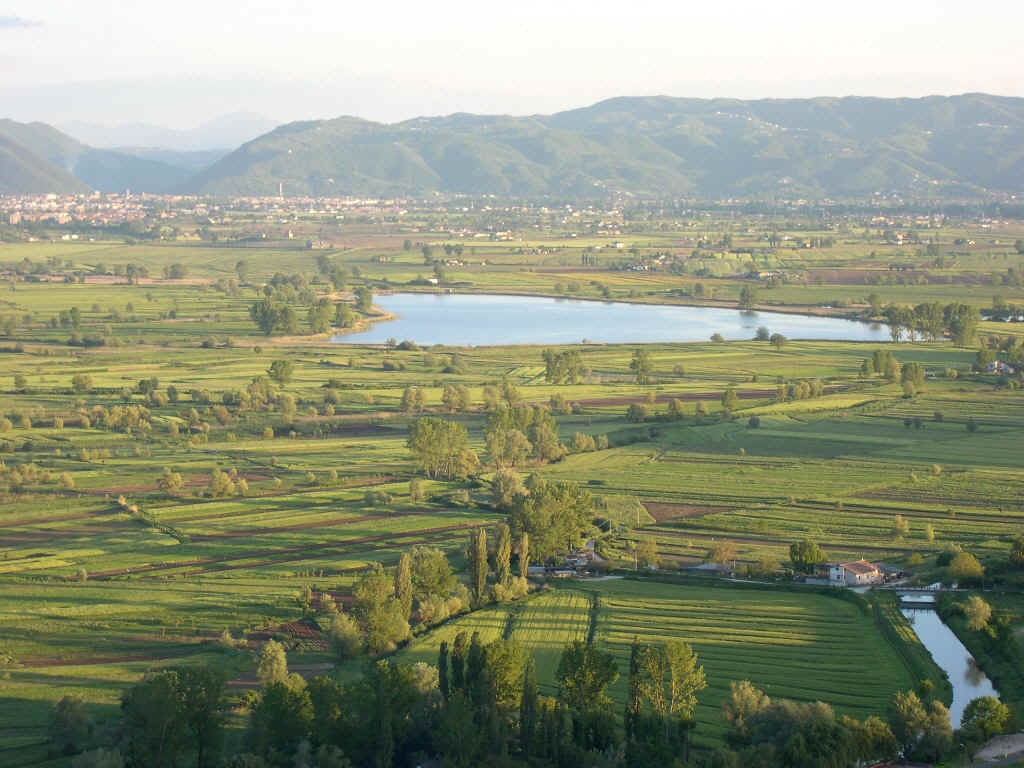 “Francis has sanctified Assisi, his native city, but shone in the province of Rieti to a special fondness and for the splendor of the many miracles.”
(Anonymous Reatino, Actus Beati Francisci in the Rieti Valley, 7 P, ed. By A. Cadderi, Assisi, Edizioni Porziuncola, 1999)

It takes place all within forty-four (1182-1226) biography of the saint who changed the history of the Church: St. Francis of Assisi. “Good morning, good people”, with these words in the fall of 1208 (October 4) the young Francis greets the inhabitants of Poggio Bustone, one of the villages from which begins preaching in the Rieti valley, interrupted only by the mystic retreats between wild woods of the area.

In 1223, Fonte Colombo, writes the Order, the way that his brothers will follow over the centuries. In the same year, in Greccio, creating the first nativity scene in Christian history, so “Greccio has become like a new Bethlehem.” In 1225, sick eyes, he went first to the convent La Forest, where he is said to have written the Canticle of the Creatures, then again in Fonte Colombo where it is an eye operation. Forests and ancient forests still cover the hills around the Sacred Valley, the plain is fertile crops.

Devotion, unspoiled nature, the artistic beauty make reatino the ideal place to look for traces of the preaching of Francis. Built into the rock and wrapped in the woods the four Franciscan Sanctuaries are a living witness of Franciscan spirituality and an ode to the beauty of nature.

The Convento di Fonte Colombo
The name of the convent would be indicated by Saint Francis himself, who discovered there in a fountain surrounded by a forest of oaks. Here, in 1223, after a forty-day fast, the Holy dictated the strict rule of the Order. In 1225 he stopped again in the woods of Fonte Colombo to undergo a delicate eye operation. The monastery complex consists of a small square overlooked by the church consecrated in 1450 and the convent in part XV. Lower down, going down a graded ramp on the left of the church, are the Hermitage of St. Francis, the Chapel of Mary Magdalene (sec. XIII) and a Via Crucis tiled Capodimonte (XVIII century). The visit ends with the Sacro Speco, where Francis had a vision of Christ which confirmed the Rule.

The Convent of Greccio
Nestled in a forest of oaks, on a mountainside overlooking the Sacred Valley, the Monastery dates back, in its oldest part, at the time of the preaching of Francis. The rest of the structure was built between 1260 and 1270. At Christmas 1223 I represented the Holy Nativity of the Redeemer, for the first time in the Christian tradition, with living animals and human figures.

In the chapel of the Nativity, above the altar, it is a fifteenth-century fresco that recalls the episode. From the chapel leads to the kitchen, the refectory and the first dormitory of the friars, with the cell where Francis went to bed on the bare rock. On the first floor is the oratory of San Bonaventura, one of the first churches dedicated to St. Francis, perhaps in 1228, the year of his canonization. On the same floor is placed the old dormitory (1260-1270) composed of bare wood cells. A mule track leads from the convent, in about two hours, on top of Mount St. Francis, where a chapel of 1792 commemorates the place of the mystical contemplation of the saint.

Recently the village of Greccio and its Franciscan sanctuary were included by UNESCO among the 754 sites that are part of World Heritage.

The St. James Convent in Poggio Bustone
Isolated by green woods, the monastery was founded between 1235 and 1237. From the square, through the porch, you enter the mystical church (XV century) and the convent. The cloister retains pillars and octagonal columns of the thirteenth-century convent. You can also visit the refectory, with frescoed walls, and inhabited by St. Francis Speco. Climbing Mount Rose, to 1075 meters high, you can stop at the Hermitage, a favorite of the Holy abode, where there is a thirteenth-century church and a seventeenth-century frescoes in the chapel.

The Convent The Forest
In 1225 St. Francis, sick eyes, came to Rieti to seek treatment by doctors of Honorius III, then resident in Sabine capital. On that occasion Francesco lodged in the thirteenth century, now it annexed to the Convent. Tradition has it that, in the peace of these hills, the Saint he composed the Canticle of the Creatures. The visit to the monastery includes the Church of San Fabiano, frescoed in the fifteenth century, and incorporated in 1600 in the Church of Santa Maria; date back to the fifteenth century in the cloister octagonal pillars and convent buildings. The refectory contains the tub in which the saint would perform the miracle of grapes, turning a meager harvest in an abundant production of wine.